WUHSD Recognized for Beating the Odds 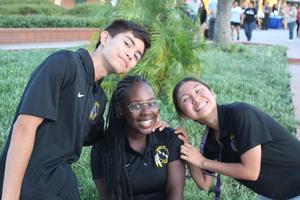 Whittier Union’s earned reputation for attaining and sustaining substantial academic progress among its diverse student population has been over two decades the making, with the support of a dedicated team of high-quality educators serving as the foundation for its rising student achievement.

The District was identified as one of 167 California school districts to excel at supporting the learning of all students, particularly Hispanics, at higher-than-expected levels on the state’s new, more rigorous math and reading assessments in a “Positive Outliers: Districts Beating the Odds” study. Whittier Union ranked at 65 in the study, which was released earlier this year by the Learning Policy Institute out of Stanford University. The Institute is headed by Linda Darling-Hammond, president of the California Board of Education.

“Our primary focus at Whittier Union has always been our students and supporting them in meeting the most rigorous academic standards to ensure their success in our schools, in college and careers,” Superintendent Martin Plourde said. “Being recognized for our remarkable achievement levels is a testament to our culture of collaboration and our firm belief that demographics do not determine destiny at Whittier Union, where every student deserves the opportunity to flourish.”

Students of color, as well as white students, in positive outlier districts consistently outperform students of similar demographic makeup in other California districts, according to the study. Many of these districts also are closing the gap on a range of other outcomes, including graduation rates.

Whittier Union’s student academic achievement has continued to soar in multiple areas at every school.

While the District’s overall graduation rate is 92%, 97% of Whittier Union students are graduating from the five comprehensive high schools in four years; for those who need more time and support, the District’s alternative programs, Frontier and Sierra Vista, allow students to graduate at higher levels due to the one-on-one support from staff.