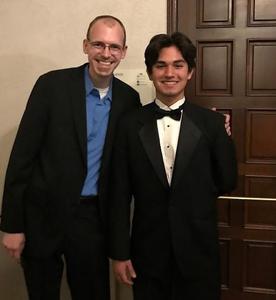 The California High School music program is receiving accolades throughout California and beyond, with four Cal High choir members being recognized for their exceptional singing talents and being named to prestigious state and regional honor choirs.

“This is a tremendous achievement for the Cal High music program. Making Honor Choir for a singer is comparable to athletes being selected for CIF all-star teams,” Cal High Choir Teacher Dan Hawkins said. “We believe Calvin is the first male singer from Cal High to be selected for SCVA and only one other CHS student has made ACDA honors. I could not be prouder of our singers!”

Monsivais was selected to SCVA after a rigorous audition which saw him perform a variety of music skills, such as singing scales and displaying tonal memory, performing an Italian-opera aria, and sight-singing a music exercise with only one minute to prepare. Monsivais made his debut with SCVA during its High School Honor Choirs Weekend, held Nov. 20 at the University of Redlands.

“Being selected to participate in the SCVA Honor Choir was truly a gift,” Monsivais said. “Rehearsing and performing with my peers, who quickly became my friends, was an incredible experience. Most importantly, I'd like to say thank you to my choir director, classmates, family and the SCVA staff for supporting me and making this possible.”

Fonseca, Pineda and Navarro were chosen for the ACDA Honor Choir after auditioning via an audio submission. Along with performing scales and a solo song, the students learned and performed a portion of a song that will be included in the ACDA final performance, to be held in March 2022. ACDA Honor Choir members are chosen from across California, Hawaii, Arizona, Utah and Nevada.

“Congratulations to our Honor Choir recipients, whose hard work and dedication have given them the opportunity to perform at the highest levels,” Cal High Principal Bill Schloss said. “The awards reflect the continued progress and excellence of Cal High’s choir program under the leadership of Dan Hawkins.”