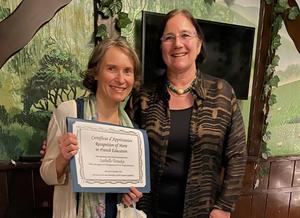 Santa Fe High School students have been saying “Oui, j'aime ça!” (“Yes, I love it!”) in world language teacher Isabelle Teraoka’s French class for more than 15 years, immersing themselves in French culture while channeling the Belgium native’s passion for language, words and sound.

Whether the students are conversing entirely in French, watching French films and TV shows, or participating in a French language poetry slam workshop via Zoom, Teraoka’s patience and enthusiasm has helped scores of students master a foreign tongue that is the international language of cooking, fashion, architecture and the arts.

For her outstanding leadership and excellence in teaching and service, the American Association of Teachers of French (AATF) Southern California chapter has awarded Teraoka its 2022 Recognition of Merit in French Education. Teraoka received her award at the AATF end-of-year dinner at TAIX restaurant in Los Angeles in December 2022.

“When I received the award, I felt it was like wind in my sails. Especially with the challenges of the last two years, this is very special for me,” Teraoka said. “As a language teacher, you are personally invested in your students, you are conversing with them for an entire class, so I feel this award is for my students. This is very meaningful to me. I work very hard. I am typically one of the last teachers to leave the school every day.”

Whittier College Program Coordinator of French Cultural Studies Marie-Magdeleine Chirol Hill presented Teraoka with the award, praising her immersive teaching style and ability to turn out graduates who have levels of fluency above that of many college students. Chirol Hill pointed to a current Whittier College French student, Santa Fe Class of 2022 graduate Damian Garcia, as evidence of Teraoka’s effectiveness in the classroom.

“This year I have the pleasure of having one of her former students in my conversation class,” Chirol Hill said in her presentation. “I am impressed by the level of this first-year university student. There is no doubt that this student’s success is partly due to Isabelle’s great teaching qualities and the many interactive activities included in her classes.”

Born in Belgium, Teraoka first found a love of language while vacationing with her family in Spain, giving Teraoka her first experience in learning a foreign language. When she was nine years old, Teraoka spent 18 months living in the United States with her family, attending an American school and learning English. Upon returning to Belgium, she was able to continue learning English by watching Disney movies and reading books.

Teraoka’s family relocated permanently to the United States when she was in the eighth grade. After receiving a bachelor’s degree in Spanish and Latin/Greek at Rutgers University, the multilingual Teraoka found her way to Southern California and earned a teaching credential at California State University, Long Beach in 2005. She began teaching at Santa Fe later that year, immediately establishing a rapport with her students.

“I’m glad that I decided to learn French because we not only learn the French language, but we also learn about French-speaking nations and their beautiful cultures,” Santa Fe senior Karina Ramirez said. “We have made crepes and ratatouille. We have interactive assignments and we all work together. Ms. Teraoka is my favorite teacher. She is sweet and understanding and patient and her class is a lot of fun.”

Teraoka teaches French 1-4, Spanish 1, and Advanced Placement French. She also encourages her students to attend extracurricular events, such as Whittier College’s annual French play and the American French Film Festival in Los Angeles. Teraoka prompts dialogues beyond the classroom by arranging Zoom meetings with unique French speakers who share their passion and experiences with the students.

“We are thrilled to hear that Isabelle Teraoka has been honored by her colleagues and peers,” Principal Craig Campbell said. “Isabelle is a creative and innovative teacher and has an amazing rapport with her students. Isabelle doesn’t just teach language, she serves as an ambassador for world culture and diversity.”

WUHSD_FRENCH1: Santa Fe High School world language teacher Isabelle Teraoka (left) was presented with a Recognition of Merit in French Education by the American Association of Teachers of French (AATF) Southern California chapter, for her stellar efforts to promote French language and culture. In her presentation, Whittier College Program Coordinator of French Cultural Studies Marie-Magdeleine Chirol Hill (right) praised Teraoka for her ability to graduate students who have levels of fluency above that of many college students.