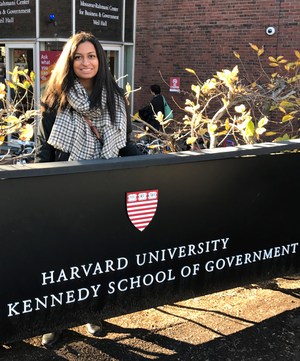 When California High School senior Lauren Anderson opened a letter from Harvard University, she was on the school’s track preparing for practice. Only two words – “congratulations” and “accepted” – sunk in before she ran across the field to her coach.
During what she described as a surreal moment, Anderson’s track and field coach read the letter for her, which stated she was accepted to the Ivy League school for the 2017-18 academic year as part of its early admission program. Only 14.5 percent of early applicants – or 938 out of 6,473 students – were admitted to Harvard’s class of 2021. The overall acceptance rate is 5.4 percent.
“It feels like a dream to get accepted already and know where I will be in the fall,” said Anderson, who will be one of two valedictorians for Cal High’s 2017 graduation ceremony. “This truly shows that hard work can pay off.”
Described by her teachers as “equally extraordinary in her intellect and work ethic,” Anderson’s ambition in both her academic and extracurricular endeavors have made her a standout student.
Anderson, who holds a 4.53 GPA, earned a five out of five score on all six of her Advanced Placement exams, which test students on college-level coursework and offer college credit for passing scores. While this feat is impressive on its own, Sean Reagan, her history teacher at Cal High, said the scores alone do not encapsulate Anderson’s work ethic.
“She is a phenomenal student who displays a rare combination of great ambition tempered with extreme maturity, care and humility, which has earned her the respect of all who know her,” Reagan said. “Lauren is a confident young woman whose accomplishments in high school speak volumes about what she is capable of achieving in her future.”
Last year, Anderson approached her counselor about taking the test for AP Art History. Cal High had not offered the class in several years, but Anderson had a simple solution: she would teach herself the material through independent study. With minimal guidance from her teachers, Anderson managed to ace the class and earn a 5 on the AP exam.
Anderson also earned a 5 on the AP Human Geography test without ever enrolling in the class, placing her among the 11 percent of test-takers to receive a top score on the 2016 exam.
These feats were accomplished while juggling a daunting schedule of extracurricular activities, including track and field and Model United Nations, and keeping up with her regular coursework.
Described by Reagan as “tremendously motivated in all aspects of her life,” Anderson’s excellence also extends to her athletic pursuits. Talented in shot put and discus, she advanced to the California State Championship Track and Field Meet last year and was named the Whittier Daily News 2016 Athlete of the Year.
Anderson’s most avid interests, however, are in history and politics. These passions led her to join Cal High’s Model United Nations team when she was just a freshman. The Model U.N. program teaches students about international issues and builds their research, negotiation and speaking skills by sending them to local, national and international conferences.
As a freshman, she attended the Berkeley Model U.N. Conference, the most competitive event of its kind in the Western United States, and won an award often reserved for junior and senior participants. Reagan, who advises Cal High’s Model U.N. program, said Anderson’s leadership was instantly palpable when she joined. He knew she would become an influential member of the team.
“When she was only a freshman, Lauren’s writing and speaking abilities already displayed the academic and personal maturity of a college graduate,” Reagan said. “Our only other award from that conference came from our team president, a senior in his fourth year of Model U.N. who became valedictorian that year. Lauren equaled him when she was a freshman.”
Anderson hopes to continue pursuing her passions this fall at Harvard, where she plans to major in government and minor in English or art history.
“Lauren is an ambitious student with an unparalleled motivation to make a difference in the world,” Cal High Principal Bill Schloss said. “Her leadership and spirit will be missed at California High School, but we are thrilled to see what the future holds for one of our school’s brightest young minds. There is no doubt she will continue to astound us.”