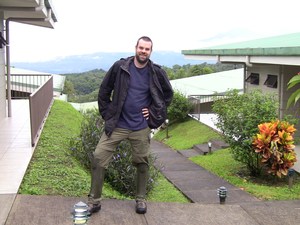 Santa Fe High School science teacher Brett Stratton returned to the classroom with tales of venomous fer-de-lance snakes and spider monkeys from Central America after he completed an Inquiry in Rainforests teacher program that sent him to Costa Rica for field study this summer.
Stratton joined a select group of 10 teachers from across the United States who were chosen by the Organization for Tropical Studies to conduct research abroad from July 8-21. More than 100 teachers applied to the program, which covered all expenses of the two-week trip and trained teachers in videography, allowing them to document their work and produce instructional videos for their classrooms.
“Being immersed in nature and the diversity of life that Costa Rica offers was an amazing experience,” said Stratton, Santa Fe’s science department chair. “The only thing as exciting as the journey is the idea of sharing it with my students. It’s going to open up a whole new world for them and allow them to push the boundaries of their own study.”
Stratton divided his time abroad between the La Selva Biological Station and Soltis Center For Research & Education in San Isidro, Costa Rica. He studied the behavior of leafcutter ants, which form one of the most complex animal societies on the planet. Experiments included putting out bait and testing ants’ organized responses. For Stratton, the study turned unexpectedly perilous when he nearly stepped on a deadly fer-de-lance snake camouflaged as a pile of leaves. He came within a foot of the viper and was able to capture his death-defying encounter on film.
Costa Rica is home to more than 500,000 species, boasting a biodiversity that makes it prime location for study. The experiments were often collaborative between the visiting teachers and staff from the Organization for Tropical Studies, a nonprofit consortium founded in 1963 to strengthen education and research in tropical biology. It has grown to include 63 universities and research institutions from the United States, Latin America and Australia.
Stratton has already begun building lesson plans for his Santa Fe students, enabling them to craft their own inquiry-based projects. He’s made instructional videos for the assignments and will ultimately have his students produce videos based on their personal experiments.
“Science is much more exciting when you can show rather than tell,” Santa Fe High School Principal Craig Campbell said. “What Brett is doing is showing young people the magic of science in a new way that will ignite their own discovery. The information he has brought back from his journey will help us continue to build upon our science curriculum, and have a trickle-down effect on our students and staff.”