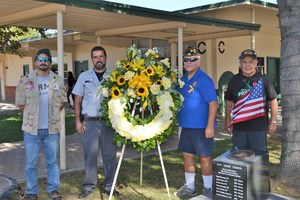 Pioneer High School will celebrate staff who have served in the armed forces and remember members of the Titan family who died while serving their country during the school’s annual Veterans Day ceremony on Thursday, Nov. 9.
Sponsored and organized by Pioneer’s Associated Student Body, the ceremony will feature remarks from school officials and students, patriotic performances by the school choir and band, the lighting of the Titan Torch by veterans, and placing of a wreath at the school’s memorial.
The annual event will be at 10 a.m. in the campus quad, 10800 Benavon St., Whittier. It is open to the public.
As part of the ceremony, a wreath will be laid next to a stone monument by the flagpole in front of the school that is dedicated to the “memory of those Pioneer alumni who have given their lives so that others may live in freedom.”
Donated by the class of 1970, the monument features the names of six Pioneer High School alumni killed in action in Vietnam: Hugo Bocanegra, class of 1965; James Eisman, class of 1964; Dennis Fuller, class of 1966; Pedro Hernandez, class of 1966; Danny Rundle, class of 1965; and Mark Thirkettle, class of 1964. The soldiers included star athletes, a thespian and an ASB president.
They all died within two years of entering the war.