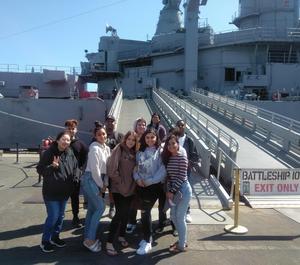 The Iowa was decommissioned from service in October 1990 after 19 years of service. In 2011, it was donated to Los Angeles and moved permanently to the Port of Los Angeles where it has served as the USS Iowa Museum.

Students were given access to the different decks on board the ship, as well as the stateroom where President Franklin D. Roosevelt spent time strategizing the Allied response to the war. Students learned of the different positions sailors held and learned of the ship’s defense mechanisms.

Upon return from the battleship, students had an opportunity to record their experience on the educational tool FlipGrid and explain to their teachers what they had learned.