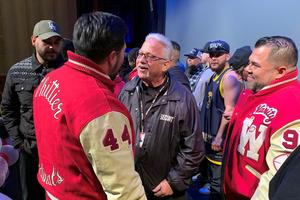 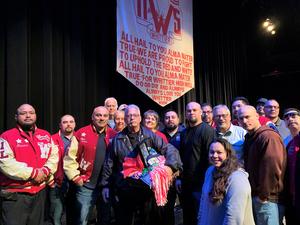 During his storied career as an inspiring football coach at Whittier High School, Walter Scott never gave up on his players, always encouraging them to forge ahead. Since retiring from coaching in 2012, Scott is still a beloved figure on campus, working as a security officer and helping to foster a proud Cardinal community.

Scott was reunited with dozens of his former players on Jan. 17, when student service group Cardinals with CLASS and Whittier-based organization dude. be nice (DBN) held a surprise recognition assembly with the entire student body.

“I’ve had the privilege of working with you all for 30 years, and it’s been amazing,” said Scott, who graduated from Whittier High in 1973.

Cardinals with CLASS is a positive support system framework that recognizes students who exhibit positive behavior in an academic setting as well as in the larger community.

Scott joined the Cardinal football coaching staff in 1988 and was promoted to head coach in 1994. He also worked as a classroom aide and joined the security staff. He was honored for demonstrating citizenship, leadership, achievement, self-respect and service to the community (CLASS).

“We have the best kids in the country. I want to thank all of the wonderful people up here, my former players, the faculty,” Scott said. “It’s been a blessing to work with all of you.”

The program also honored Whittier students with family members in the service and local law enforcement. Cardinals with CLASS also commended the Whittier High Class of 2020 for sending over 1,700 cards to United States Armed Forces personnel.